To understand the meaning of NotUsed we need to understand that Akka Streams are hybrid beasts that have two different concepts of value: the value of what “flows” in the stream, and the value of what is produced and visible outside of the stream. See, an Akka Stream is only going to run if it is closed, which is to say that it has a beginning and and end (or a Source and a Sink), and therefore nothing outside the Flow can peek into it. That’s fine if all you do is to carry data from point A to point B, but if by any chance you’d like a stream to produce a value that you’d like to look at, you won’t be able to do so since you can’t touch this.

Let’s look at an example (behold my awesome drawing skills): 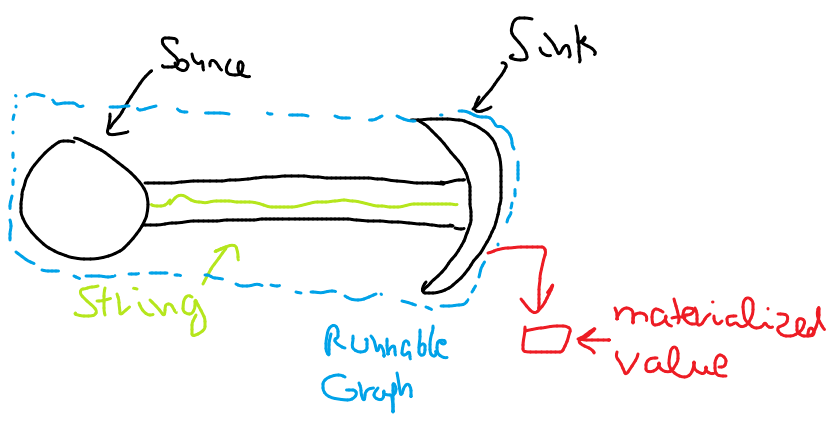 Now unless you already know Akka Streams, I’m pretty sure I’ve lost you, which is exactly what I wanted so that you can understand what NotUsed means. So we have a Source that will emit “a”, “b” and then “c”. Next we have a Sink that consumes strings and combines them. We combine both of these, creating a RunnableGraph – it is called like this because there’s both a beginning and an ending, the graph is closed, and hence we can run it. What’s probably very confusing at first is the following line:

Here’s the catch: not only do we want our letters to flow from the source to the sink, but we also would like to retrieve the result of what the sink produces (the concatenation of “a”, “b” and “c”). In Akka slang, that’s materialization. And in order to materialize something we need a materializer. So when we say source.toMat(sink) what we really say is “connect source to sink which is going to produce a value out of it that can be accessed from the outside by mere mortals”. “Okay, great!” you say, “but what’s up with this Keep.right ?”. And you will be right to do so (pun intended) because that’s not obvious either.

Here’s a piece of information that will help, especially if you’re native in a Right-To-Left language: in Akka Streams, graphs are flowing from the left to the right.

Akka Streams allows to materialize (or, to keep) either the left or the right value of a stream. In this case, we want to keep the right one (what comes out of the sink), which is why we specify Keep.Right. You could also want to keep what’s on the left-hand side (in this example, it wouldn’t make very much sense, but in other, more complex cases, it totally does). In fact, you should head over here and read this bit of the Akka documentation.