Akka uses the The Φ Accrual Failure Detector for failure detection, which is to say for answering the question of whether a node is alive or not. That’s one of the harder problems of distributed systems since it is virtually impossible (from the point of view of one node) to tell the difference of a remote system being completely unavailable (process crashed, computer died, etc.) or slow (network congestion, other kind of congestion such as CPU during a garbage collection for JVM processes, etc.).

Now, the Φ Accrual Failure Detector has certainly a nice name to it. Phi. Just casually mentioning it in a conversation makes you sound a lot smarter (at least if you’re hanging out with people inclined to software engineering – in other social circumstances, it doesn’t work that well). And believe it or not, phi is also the metric by which to measure consciousness. So why look for something else? Well, the original paper is from 2004 and so I started wondering whether there hasn’t been, in all of those years, any new research related to failure detectors. As a result of searching a bit I found quite a few interesting papers. Since I’ve gotten the hang of the slight sense of desperation and feeling of inexorable existential crisis that comes with working with distributed systems I decided to go ahead and test out a few of those new approaches to failure detection.

This article covers my findings and learnings during the implementation and benchmarking of a new accrual failure detector. 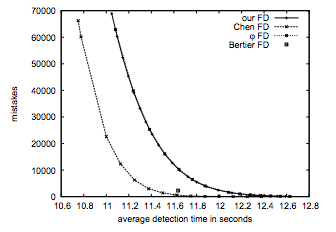 Adaptive Failure Detector performance as described in the paper

Given the similar nature of those failure detectors and since the paper claimed that this new failure detector was outperforming Φ (see the graph above) I decided to go with implementing it as a candidate for this experiment and see if I could reproduce the paper’s claims in practice. Given that they are both based on process monitoring using heartbeat reponses this also meant that I could simply switch out the Φ accrual failure detector without touching any other part of Akka, which may be required for other types of failure detectors out there.

I wanted to be able to benchmark different failure detector implementations with varying parameters and for various cluster sizes (3, 10, 50, 100, 400). For this I needed a way to create the infrastructure and then a way to run and report benchmarking results.

For example, I wanted to be able to run 6 scenarios (on the same machines) with varying parameters:

A pseudo-algorithm of a complete benchmark session for N nodes looks as follows:

An email report is generated after each round and the complete set of detection times is sent out when the entire benchmark is done.

My inbox these days

Building the infrastructure with Terraform

In order to build the testing infrastructure I used Terraform on AWS. The terraform configuration first creates a standard Ubuntu node, then provisions it with the JVM, a Consul client and the Akka JAR and turns this instance into an AMI. This image is then used to create N instances in a much faster fashion than provisioning each instance from the start. Terraform also creates other necessary resources such as the AWS placement group. The Consul cluster (3 nodes) is also created using Terraform. 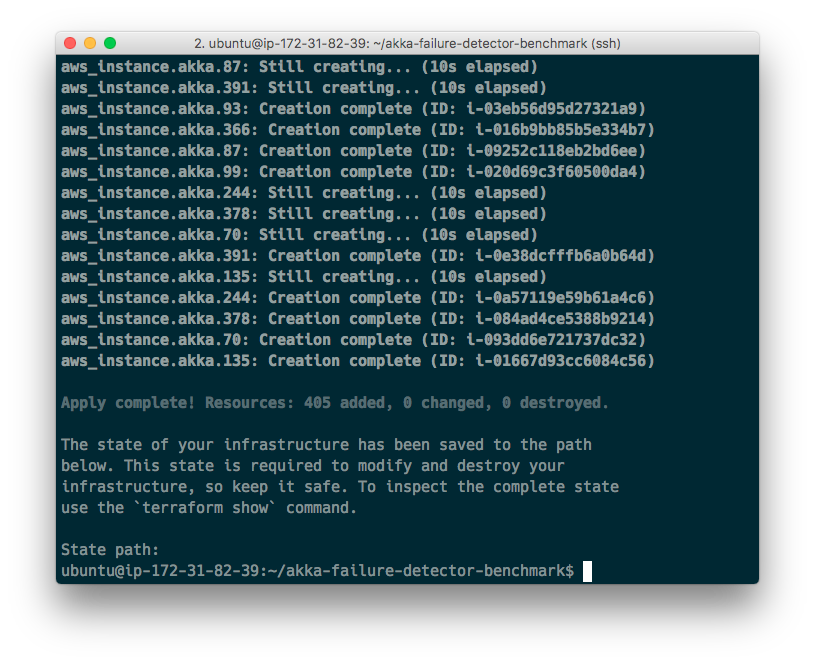 Assembling the cluster with ConstructR

In order for nodes to find eachother without necessarily knowing which IP addresses they will have, I used Heiko Seeberger’s ConstructR together with the Consul module. This really worked well, including for large clusters (the only thing to take care of for those was to slightly increase coordination timeouts, join timeouts and number of retries).

I used Papertrail in order to get a sense of what is happening on the nodes. There’s no need to register systems with Papertrail, they get dynamically added which is very convenient for such an experiment with dynamic infrastructure. The logs are easy to filter and to search, which makes it easier to look for failure causes.

I setup Papertrail using logback and logback-syslog4j, all the instructions for this are provided by Papertrail so it is quite an easy setup.

There’s probably plenty of alternatives for this but I thought I would mention it anyway: Mailgun has a very nice API for sending e-mails. I used the standalone Play WS library for making calls to it.

The benchmark is performed by a cluster singleton actor (the benchmark coordinator) that is also an FSM actor. The states are:

During a benchmarking round the happy path will be WaitingForMembers -> PreparingBenchmark -> Benchmarking -> WaitingForMembers -> etc. until the round is done. Then the coordinator asks all members to reconfigure themselves and this goes on until all steps are through. As we’ll see later though, the larger the cluster, the lower the chances are that the happy path will be followed as such and instead the chance of temporarily “loosing” a member increases as the cluster size increases.

The sweet spot for the phi accrual failure detector according to the paper is for 8 <= Φ < 12, where 12 has a lower mistake rate but a higher detection time. Further, the experimental results presented in the paper “[show] a sharp increase in the average detection time for threshold values beyond 10 or 11”.

Taking this into account I’ve run the benchmark for Φ = 8, Φ = 9, Φ = 10 and for p = 0.2, p = 0.25, p = 0.3 as well as p = 0.05 (out of curiosity). Note that when using the phi accrual failure detector in combination with cloud-based deployments you shouldn’t rely on values of the thresholds that are too tight (i.e. that can be influenced by lost heartbeat messages) since the likelyhood of having network trouble on this type of infrastructure is higher than when running it on a plain LAN (more on this later) and this can trip the phi failure-detector which relies on normal distributed inter-arrival times.

Without further ado, here are some summarized results:

Detection latencies for a 10 node cluster in microseconds

Detection latencies for a 400 node cluster in microseconds

What’s also interesting to look at is the detailed frequency distribution histograms for both types of failure detectors:

So what does it all mean?

Observations, learnings and other comments

More interesting than the results in themselves has been to me what I’ve learned while building the benchmark setup.

When you start operating at a certain scale the system doesn’t obey the same laws it does in a smaller variant. You don’t merely see a set of problems that arise at a small scale as being amplified, instead, there is a whole new set of issues arising at a large scale that did not affect you beforehand.

Since we’re using Akka as a tool to benchmark the Akka failure detector, the benchmark itself is affected by errors in the failure detection and generally by the challenge of having a stable cluster.

In the experiment we only really expect one node to become unreachable at each round – the one that we’ve explicitly asked to go away. If any other node becomes unavailable then one of two things has happened: either the failure detector has erred (more likely) or the node really become unreachable due to a network partition or sudden increase in inter-arrival times (less likely, but as we’ll see, not impossible). It was therefore important to devise a process by which we can discard those scenarios. In practice each unscheduled unreachability notification received by the coordinator would trigger a 5 second timer that would eventually instruct the suspected node to restart. If no reachability notification is received within 5 seconds this node would then restart and eventually become a proper member of the cluster again.

I already knew that the AWS cloud was subject to occasional network partitions and this experiment showed me how frequently this appears to happen. It didn’t really matter if I ended up paying 600 $ to get access to instances living in the same placement group, I still got a fair number of network partitions even within the same placement group. Granted, the partitions didn’t last very long but long enough to trip my experiment, which was annoying.

Interestingly those occurrences were mostly limited to single nodes which were still able to communicate with the outside world and send logs out. Not that that’s a good thing though, this is actually your worst case scenario (having parts of the system not being to talk with one another, but be able to accept requests from the outside).

I ended up implementing a primitive split brain resolver for this experiment just to be able to perform an entire run without hiccups.

While developing the experiment I often had to think of the video above. This is what the cluster felt like at a large scale. See, each round would only be truly done if there had not been anything unexpected happening during the round: no unscheduled unreachable member, no removed member, no lost / unacknowledged messages, etc. In order to guarantee this it turns out that the best survival strategy is the simplest one – to reset the round and go back into the WaitingForMembers state, waiting for the cluster to stabilize and all members to be available.

It’s easy to see how large clusters become a very hard thing to achieve. The Akka Cluster is a membership service, providing the platform for building a distributed system running on member nodes. The larger the cluster gets the harder it is to reach a stable size for all members. Not all applications may need this – especially when the aim is to distribute computational load then cluster convergence is maybe not that important, something that is reflected in Akka 2.5 promoting the WeaklyUp member state to be on by default. In this experiment however where cluster stability is required to have a baseline to work with, even at only 400 members the difficulty starts to show.

That’s it for this experiment. If you have questions or comments please let me know. I’m also available on Twitter. If you are using Akka Cluster or are thinking about using it and would like some help, we can work on it together.